Lvl up in Cake Baking

My husband´s birthday was coming up and normally he would give me some hints as to what cake I should bake for him. This time he was not sure and said he had to think about it. So I asked my best friend Kathinkka if she had an idea,  because she is an awesome baker herself and creates elaborate cakes with fondant and cake-pops on a near daily basis for her family.

Knowing my husband and his love for cool games, she suggested that I could make him a "Minecraft Cake". Watching the video I thought "hey it doesnt´look that complicated, it is possible". Fueled by the encouragement of Kathi (she promised to help me of course, because she is just the best) I was already thinking about the timeline and when to do what.

I decided to do the cake in three phases, all the while anxious that my husband wouldn´t discover what I was baking.

My challenge was to bake cake, get it into the shape I wanted, color the fondant in seven different colors, cut it into squares, make an axe or sword and assemble everything in time until Thursday (my husbands birthday).

First phase - the cake
I love baking sponge cake. Its always very satisfying and it never gets dry (I hate dry cake). I decided that I would stick the pieces together with marmelade rather than ganache (too heavy) so I settled on a great recipe for a "Sachertorte", over a hundred years old - perfected by my mother, cake as well as a normal sponge cake to create a kind of pattern within the cake as well.

Double amount for the Sachertorte and one whole normal sponge cake should be enough, I thought.
But there was still the problem to solve with the axe/sword. Kathi suggested short pastry.

So on Sunday afternoon, while my husband was at his Hackerspace, I was standing in the kitchen, mixing three different doughs and thinking about how to make the axe.
I cut out the square for the cake first and then went to work on the templates for the axe and sword (to have a choice). It turned out pretty well. And frankly, once the templates were done the cutting and baking was a breeze. 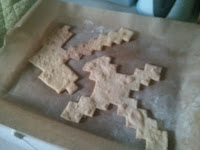 I cleaned up and hid all my cakes (my mother suggested that I should let the sponge cake cool of for one night and then wrap it in plastic, which I did) and pretended nothing happened. Because I had left over and to explain the baking smell (I thought of everything), I baked another cake. ^^ It was just a plain pie with curd and blueberries.


Second phase - the assembly
I already had plans for Monday so on Tuesday I planned for the assembly to let the cake rest for one night. I even managed to get my husband out of the house and he didn´t suspect a thing (he claims ^^). The fondant was a bit of a problem time wise (and I never worked with it before), so Kathi came to my rescue.

While I was cutting pieces of cake and glueing them together with marmelade, Kathi bought the fondant and colored it at her home.

It took me nearly four hours to do this (and clean up afterwards). Then I put it in the fridge to let it settle and cool down. Putting a note on the fridge door to open it on one´s own peril.


Third phase - the decoration
On Wednesday I was feeling the aftermath of those past baking marathons. But alas there was no going back now. Kathi joined me at my home and while she cut the squares out of the multiple fondant colors, and I arranged them on the cake.


I covered the cake in plastic again and put it outside for the night (fondant doesn´t agree with the fridge). On Thursday morning I got up early arranged the cake with some candles and waited for my husband to wake up. He was totally speechless when he saw the cake and was very touched (I guess). It was a great success and even with nearly 25 people eating cake, it was not gone. He took some with him to the office the next day.

So overall it was a great success, not only made it my husband extremely happy, I lost my fear of fondant and "elaborate" cake making. I might do it again, but maybe not this time consuming for a little while. ^^
Posted by Unknown at 11:28 AM